I’ve always been reluctant to write about dress codes in golf. Mostly because I don’t care.

I mean, really? Why is this an issue?

It’s a huge distraction from the real talking points. Take your pick, but mostly it comes down to numbers and golf’s attempts to reverse the participation decline over the last decade.

It’s ridiculous to suggest that a strict dress code is one of the reasons for attrition in golfer numbers. At least it is to me.

Nor do golfers have to wear helmets, pads (for shoulders, knees, elbows, shins or whatever), gloves, mouth guards, kimonos, belts or tights like people do in other sports.

No. Even for exclusive golf courses, players only have to wear a collared polo shirt matched with (non-denim) pants or skirt, and presentable shoes.

And for the not-so-exclusive golf courses, where most beginners start out anyway, it may as well be the Pirates’ Code… they’re more like guidelines, really.

Maybe the real issue with golf clothing is that it’s unsexy.

Clothing in other sports, tennis being one example, has evolved over the years from loose, to figure-hugging. Part of the whole tennis spectacle now, in addition to feats of on-court athleticism, is the appreciation of top-level players’ fitness. The Olympics are probably the epitome of that.

Golf has some awesome athletes in its stable these days. Not that you’d know it from their what they’re wearing.

We live in a time of instant gratification and social media feedback loops. Athletic is the new sexy. Younger people know that golf-selfies don’t get as many likes as selfies on beaches or in bars with their subjects clad in tight clothing.

Of course most golfers Baby Boomer or older don’t want sexy on-course accoutrements. At least not for themselves. Millennials, on the other hand, often have something to flaunt, and golf-wear just doesn’t do it for them. I mean how many of them would have a polo shirt in their wardrobe that wasn’t a uniform of some sort?

We really shouldn’t be surprised that golf, playable from not-far-past the cradle, all the way to the grave, has a generation gap, image-wise.

So if we can agree, just for argument’s sake, that potential golfers are turned-off by unfashionable clothing, what to do?

Change… It’s the obvious answer. But it needs to start at the top, and I don’t mean the R&A or USGA. They’re too busy chasing slow play shadows rather than being concerned about golf’s image.

Sporting fashion trends are created by participants at the elite level and what they wear is decided by their sponsors. The players wear the clothes first, then the masses follow their idols. So it goes in golf.

Golf fashion, using the term very loosely, is more often associated with shock than style — I see you Loudmouth Golf and whoever dresses Billy Horschel. However, no matter how offensive the clothes, regular people still buy them and wear them for their own play.

Imagine instead if apparel designers at the golf clothing manufacturers traded loud for lithe, stripes for snug, and loose for tight?

Not disrespectful to golf, mind you. Athletic.

We’d have a situation where the hundreds of golfers on our screens every week — men and women alike — would be showing the world just how fit golfers can be. Golfers would start to be viewed as the athletes they already are, and their bodies would become part the spectacle.

Again, it’s not intended to be a sexy image. It’s a modern sporting image. Golf is a sport after all, despite the perceptions of many. And hey, if a viewer happens to find a player attractive, it can only be good for the popularity of the game. It would also probably help to change some of those external perceptions.

Golf has an image problem, definitely, but if golf-wear is an important part of the issue, then the apparel manufacturers who sponsor tour players are in the best position to influence it.

If the Coca-Cola company can help to create the lasting image of Santa as part of a marketing campaign, then Under Armour, Nike, Addidas, Puma and the rest can certainly help to modernise the image of a golfer. 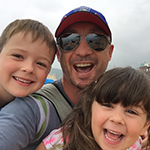 @connectgolf in ‪#‎Golfchat‬, Jeremy is 80% dad, 20% golfing entrepreneur, who in the 90 minutes each day he has to himself, works as the #GolfChat Authors editor, works on a golfing nonprofit, and tries to reverse the decline of his golf game with positive thoughts (no time for practice).