Or is it teeing up for another 18?

During the May 17 #GolfChat, @tonyjdear posed the question, “At what point would you consider golf to actually be dead?”  Which got us thinking…

Is golf dead or is golf making a comeback?

Golf is facing a crisis. The struggling economy, an increase in recreational options, an overabundant supply of golf courses and a lack of innovation in the golf industry are just some of the issues golf is facing today.

There is a serious up-side however, and that is the game itself. As Bobby Jones said,

“(Golf) is nevertheless a game of considerable passion, either of the explosive type, or that which burns inwardly and sears the soul.”

When the Great Recession hit in December, 2007, golf felt it. As a recreational activity, golf was one of the first industries to experience a decline and even as our economy has improved, golf has continued to struggle.

By any measure, participation in the game is way off, from a high of 30.6 million golfers in 2003 to 24.7 million in 2014, according to the National Golf Foundation (NGF). The long-term trends are also troubling, with the number of golfers ages 18 to 34 showing a 30 percent decline over the last 20 years. Nearly every metric — TV ratings, rounds played, golf-equipment sales, golf courses constructed — shows a drop-off. –

Video games (virtually non-existent prior to the 1980s), as an example, are now a multi-billion dollar industry keeping potential golfers on the couch instead of on the golf course.

In the late 90s, golf courses could do little to no advertising and would sell out every Saturday and Sunday with a steady flow of golfers during the week. The success of golf courses in the 90s brought an increase in demand for golf courses and saw increases in new golf developments.

My local area had four golf courses for decades, but during the 90s close to ten golf courses were built increasing the supply spreading out the golfers from four courses to fourteen diminishing the returns of each golf course.

With every industry, innovation must take place in order for an industry to thrive. As famed football coach Lou Holtz said, “In this world you’re either growing or you’re dying so get in motion and grow.”

Advances in technology, the way we communicate and our changing world have demanded innovation from the golf industry and we’ve been slow to adapt.

Despite all the factors contributing to golf’s decline, golf is primed for a turnaround with a lot of hard work from a lot of passionate people.

In my book, The Social Golf Course, I compare St. Andrews to Prestwick. Prestwick was the home of the first 11 Open Championships, and yet, St. Andrews is considered the “Home of Golf.”

But why? The answer is marketing.

“The people at St. Andrews…took it upon themselves to grow, foster and cultivate the game we all love.”

Technology is changing at an unprecedented rate and the industries that are successful are incorporating these changes in technology into their practices.  The ones who are able to implement these changes rapidly and successfully are thriving and those that are not are being left behind.

The taxi industry and Blockbuster video are two prime examples of industries who failed to innovate and were left in the dust by the more technology driven Uber and Netflix.  TopGolf and REALiTEE Golf have created massive appeal for a new age of golfer. Of TopGolf’s 4 million visitors, 54% were between the ages of 18 and 34 (source).

The way we market and communicate today is drastically different than it was fifteen years ago. Fifteen years ago we had one family computer, there was no such thing as social media and I just got my first pager.

Today, I have a laptop, a tablet, and a smart phone and am on at least a dozen social media networks.

What I bet you won’t see is anyone reading a newspaper or a magazine.

We’re getting our information from our smart phones today and it’s our job to make sure we have a presence there.

Social media and online marketing are critical to the success of the golf industry as our daily decisions are now being determined by our news feeds.  Savvy marketers can ensure golf’s message will reach those who are seeking out golf-related material and it’s critical that we make an effort to make sure our messages are being heard online.

The world is changing and we must adapt with it.  If we fail to innovate or to grow, golf will be dead.

Fortunately for us, that won’t be the case.

They are the people who participate in #GolfChat. 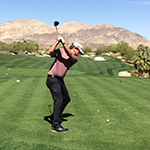