Story time: A few weeks ago, I accidentally started a mini Twitter war…

I feel like yoga pants create more conversation in the golf industry than they do in the yoga industry. https://t.co/tLHRvu2yKA

My retweet of this fluffy article from 2015 about spandex leggings on the golf course caused some strong reactions in 140 characters or less. It seemed most of those reactions assumed the author was advocating for the fashion trend, but that wasn’t the case; he was definitely against it. His reasoning was a bit shaky – citing one photo of one woman wearing one company’s pants in a gym, therefore making those pants ONLY gym attire – but his ultimate conclusion was that they didn’t belong on the course. I disagree in some situations, but more on that later.

For those of us with a Victoria’s Secret credit card, these spandex pants might also be referred to as “yoga pants.” Even if we’ve done yoga a grand total of once in our entire lives, and didn’t even make it through the entire class before dozing off. The larger conversation includes a variety of styles other than what’s pictured in the article, but they’re mostly all form-fitting athletic pants. Some are moisture-wicking and breathable; some are a cotton blend that looks really good but would need a pair of scissors and a damn inhaler to breathe. I own versions of each, and most women I know have or have had at least one pair in their pajama rotation at some point.

In recent years, the idea of wearing yoga pants or gym attire (including gym shorts and workout apparel for men) to play golf has become a heated debate. The aforementioned Golf Digest article wasn’t the first instance of spandex slander – #Golfchat on Twitter has argued over it, Paige Spiranac piped in on it and courses are changing dress codes (one way or another). There are some STRONG opinions out there.

In one corner, you have the golfers who don’t see the issue with a little extra comfort on the course; in the other, you have the traditionalists who would prefer to keep golf “a gentleman’s game.” Obviously that’s a loaded statement, but that’s a debate for another blog.

Personally, I don’t care what other people wear, which puts me in Camp Yoga Pants by default. I’ve never worn a pair to the course, but I wear them to the range religiously. My golf outfits are awesome, but a) they’re mostly skirts and sometimes the range is cold or windy, and b) I didn’t spend $90 on that matching Puma getup for it to be wasted on a sweaty range session. Also, when I hit the course, I make a day of it; most of my range sessions are after work or between errands, and non-golf attire allows more flexibility for me to just stow the clubs and go about the rest of my day.

The argument isn’t about the range, though; for those in Camp Golf Clothes, it’s about respecting the course and game. I get it. And at a private course, a dress code can keep the yogis from running amok on the greens. You choose the course you play, and if you want to rock the spandex, choose a course that suits that need. The same can be said in the reverse though – if you’re offended by stretchy pants, seek out a course with stricter rules.

There was another facet to the argument, and it seemed to be the most divisive: SHOULD courses ban yoga pants? There’s no question that many courses, public and private, have rules against things like denim and gym shorts, even open-toed shoes. But are those rules archaic? Are we keeping younger golfers or women or casual players off the course by forcing them to adhere to a strict dress code? There’s an argument to be made that the barrier to entry is high enough (you need equipment, shoes, green fees, tips for caddies, an entire afternoon of free time, etc.) without forcing people to purchase specific clothing. It’s possible that the golf world could use a nudge toward “calm down and worry about bigger things” where clothing is concerned.

My favorite part of the Twitter battle was when one scholar jumped it to say that tight pants on a woman can be distracting, and therefore detrimental to a man’s game. Which isn’t an inaccurate statement, I suppose, but he’s missing the point (read: all of the points) if he thinks that a woman’s ass is the reason he’s golfing poorly. If you can’t keep your eyes to yourself, that’s on you, and frankly, if the butt’s that good, you were going to be looking anyway. 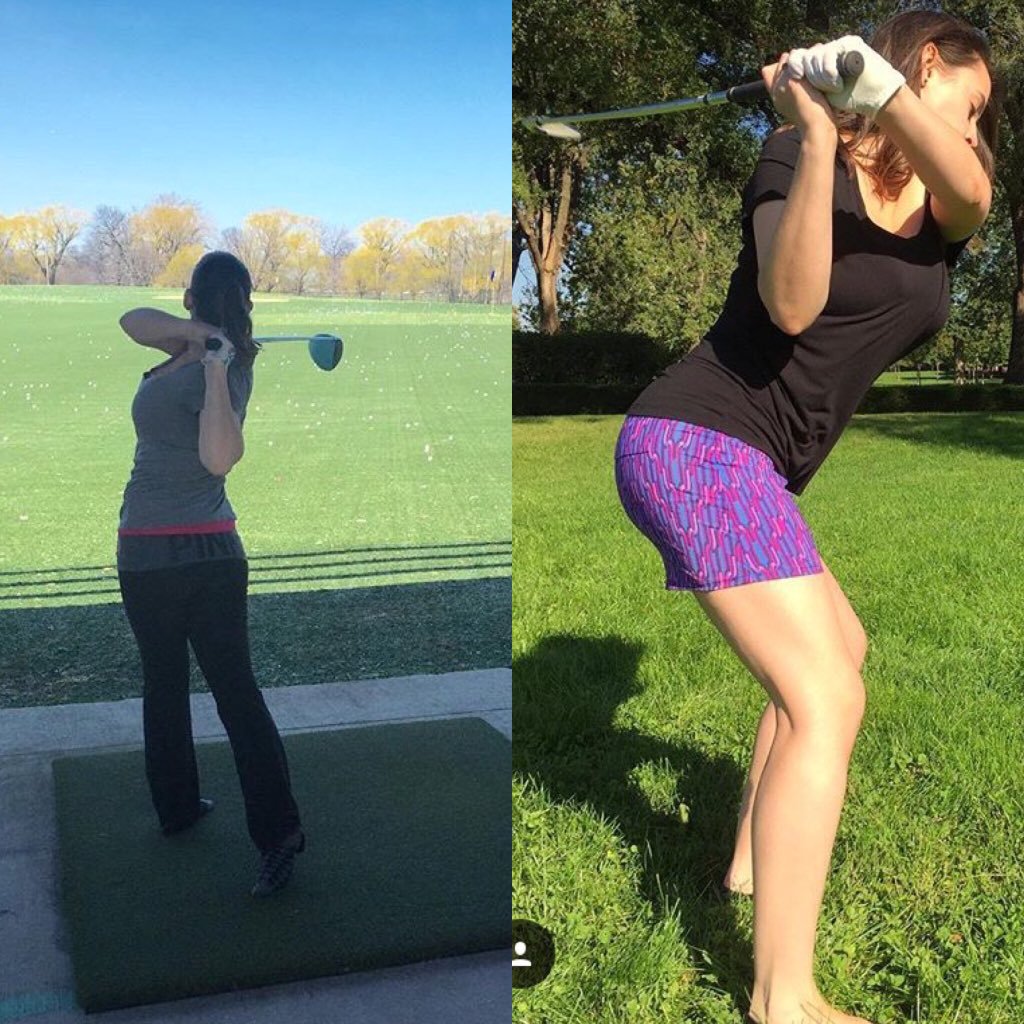 Another debate point is that much of the golf attire out there is revealing; none of the skirts I have would be considered modest, and even the thicker ones equipped with shorts underneath are form-fitting. I shared this image to demonstrate that clothing sold specifically as golf attire can be arguably more distracting than spandex pants:

Instead of addressing the point, the gent who argued that his golf game suffers around spandex decided to change the subject to ask if I was hitting out of the rough with no shoes (I’m not) because apparently he also hates valid counterpoints. I will say this – the photo on the left isn’t nearly as bright for comparison, but I can assure you that my butt looks much better in the skirt.

I guess I just don’t see the benefit in fretting over someone else’s pants, especially when you’re probably some 400 yards away from those pants at any given time anyway. Non-golf attire on the course isn’t going to be the death of the game; if anything, it’ll open doors for people who’ve written the sport off as elitist. Fashion isn’t causing slow play or increasing green fees. The only game a pair of pants should be affecting is that of the person wearing them, so skip the stretchy pants if you’re not a fan. Adapting a dress code isn’t the same thing as mandatory downward dog on the first tee – you can still opt out of yoga pants in favor of attire in which you’re more comfortable. Because forcing you to go out and purchase clothing you dislike wouldn’t be very fun or welcoming, now would it?