Sitting on my couch eating ketchup chips and crushing pints of Triple Bogey beers should not give me, or anyone, the authority to influence a golf tournament. It doesn’t pass the common sense filter.

And while it’s been nice we’ve had a nice stretch of a few weeks without a serious rules incident in golf, allow me to wade into the murky waters of rules in golf. Because like everyone else, I have an opinion on this and it needs some unpacking.

I like the self-regulating nature of golf and I like the principle of play the ball where it lies and I like that many golfers will tell their partner they got a 6 instead of a 5. In competitive play this becomes even more important. But I also play for fun with family and friends and we don’t get all caught up in stroke and distance, putting out 18” putts and we may even allow ourselves a chance to remove a ball from a bunker which resembles a parking lot more than a sand trap. Relaxed rules, at times, are appropriate and keep the game fast and fun.

I can’t imagine what would happen if during the two or three times a year that my wife plays, if I went all ‘USGA’ on her and told her 6 holes later that her 8 was really an 12 because she didn’t place her ball appropriately back on the green after marking it. You could kiss her participation goodbye from that point on. And this is not to be hypocritical, she wants to play well and play properly but within the context of an afternoon out with friends.

I am a huge proponent of Relaxed Rules which I first saw on Golf Channel some time back. The game is meant to be fun and played appropriately. To her and our group, what is proposed here is most appropriate. Now, getting back to the USGA…and the official rules of golf; I still believe we can allow for a greater filter of common sense to govern rules. Pace of play and participation are issues facing the game.

For sticklers of rules a couple suggestions:

In closing, I love the game of golf. But I am finding myself watching some tournaments with an impending sense of doom that my HDTV lacks the clarity of someone’s 80” 4D to see the most subtle of infraction which had zero impact on the integrity and outcome of the hole but cause a player to lose a tournament. Golf is a game. Golf is fun. Let’s keep it that way. And when appropriate, let’s honour the full set of rules but more so the integrity of the game which the rules are built upon. 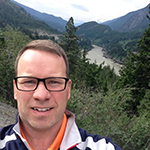 Back to #Golfchat Authors