My Cup runneth over with the Sandbaggers Cup of Slow Play.

There are few things in life that rattle my calm or shake my cage too much but the game of golf has managed to supply a couple of words that send me into a flat fried frenzy and make me see life through a red mist.

It’s a subject I lived in blissful unawareness of for all of my years until I took up with the beautiful game and, even when it first fell upon my hemisphere, I paid only a light, but respectful cap-tipping nod to it. However, I have come to hate it, more so because it is a matter that has never been resolved, quite possibly never will, has been flogged to death a million times, resuscitated, and resurrected like the proverbial phoenix to womble its way eternally through every platform of social media that has ever been conceived and is yet to come. I can’t prove it but it probably exists in a parallel universe where it is designated as a weapon of torture and it seems to travel in a perpetual circle like particles in the Large Hadron Collider.

For me then, the two words of mass destruction are, “Slow Play”.

The first thing you need to know is that it’s out there. It always has been. It’s primordial and existed in the Big Bang Soup before it crawled out and took on a life of its own. The day golf was invented was the day slow play began. Nobody ever began a sport for the first time ever and played it like they were in the Olympic heights of perfection, so it doesn’t matter where you look, starting out is always at a slow pace.

Golf is no exception. In all sport, some will learn faster than others and that is a matter of talent or time or money or opportunity or even a smacking of luck, which in turn leads to differentiation and, ultimately, competition. Since competition is all about skill, dexterity and speed of execution, some will be faster and fitter than others. It’s a given. Get over it.

The second thing you need to know is that it’s here to stay – it doesn’t matter if you were not around in the garden of golf’s Eden. If you play golf, once upon a time in la-la-land, you too were a beginner and the important bit is you were slow. So as long as there is golf, there will always be beginners and there will always be slow play. It’s another given. Make room for it on your playing schedule whatever your level. In everyday parlance, I think we call it forbearance. Get on with it.

The third thing you need to handle is the need to grow the game. I am going to make a cracking assumption here. You want the game to be inclusive, right? That means all-embracing: gender, non-gender, transgender, straight, gay, lesbian, old, young, middle-aged, colour, non-colour, fit and not-so-able bodied. The list is by no means complete but you are getting the gist.

We encompass “people-kind” – I’ve coined a new word – with all their imperfections: a warts-and-all embrace. If you’re really going to grow the game this means slow play is the take-off point and there is no avoiding it. Give over and get it together.

The fourth thing you need to ponder on is image. I’m not talking about how cool you look in your Calvin Kleins or how ace you are at the machinations of the golf swing. Think telly. Think what we see beamed in to our homes and heads with regularity: the pro golfers who take time over their shots – and they are many. Yes, some sit in the doldrums of a putt long enough for me to spring-clean the house, mow the lawns, feed the neighbour’s cat and paint the guest bedroom, but I never moan. I see it like this – what’s sauce for the goose is sauce for the gander and that apt adage adds it up neatly in the astute “action speaks louder than words” axiom. Whatever our handicap, we forever live in hope of improving our game and we will happily garner all that we glean from the television for use in our game. We will never reverse the slow play trend unless it is regulated and broadcast into the public domain and brain. Get my drift here?

The fifth and final thing you need to know is this: if I gathered up all the slow play solutions that have been postulated, turned them into wallpaper and bequeathed the resulting rolls to Queen Elizabeth 2, she could happily wallpaper over Buckingham Palace, Windsor Castle, the Palace of Holyroodhouse and Hillsborough Castle. And if she wants a day off from her official residences, she can cut and paste her way through her private residences at Sandringham House, Balmoral Castle, Craigowan Lodge or Deinadamph Lodge and still have a scroll down yardage of roll left over.

The message is… erm – the solutions are not working. If they were, we would surely not be bantering the topic round like those quarks, anti-quarks and gluons of Hadron’s perpetual circuit. Get a fix on it.

Do I have a solution to this?

Of course I do. I wasn’t born yesterday or the day before and it’s taken years to cultivate this level of laissez faire. My solution, God help us, for slow play is this:

Take an 18 hole golf course, split it in two lots of nine, divide the handicappers into two categories with fast players going round their nine holes faster than the speed of sound for as many times as they like while the slowbies and newbies and high handicappers haltingly grind round the other nine at their own preamble and speed.

Every few months, swop the nines over to maintain interest. Mark the speedos from the slow-gos with different coloured tabards and if one class of golfers should cross the great divide onto the wrong nine, let the turf war commence. Forget the Ryder Cup – handbags, golfbags and man bags at dawn duels and we could all fight for the new accolade of the Sandbaggers Cup.

Get out there and try that for size.

Now Ma’am, I need a word. With a solution like that, I expect to be in the dunce’s corner and blacklisted by every golf club in your realm. I’m not expecting any different treatment on the worldwide fairways either. My name will be mud. In all your Crown Estate holdings, d’ya happen to have a wee course in a quiet backwater away from the corgis and horses that I could meander slowly around, smelling the roses, feeling the whisper of a wind in my hair and allowing the sun to kiss my face and my brain to ponder the permutations and combinations that make up the intriguing game that is golf.

Heaven. Get back to me please, QE2. 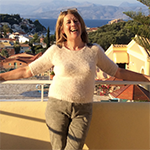