Golf.Com has redesigned their site, boasting of a cleaner design, faster loading and a new editorial focus. Plus, they’ve added a virtual store to let you buy clubs and other golf gear. In spite of the revisions, however, I still can’t take the publication seriously. Front and center is the cheesecake that drove me away from the last version.

Seriously, people. This is the 21st Century. I am no feminist, but I find the treatment of female athletes in the online golf publications demeaning. The front page had FIVE stories on the “Most Beautiful Women in Golf”, plus “The Wives and Girlfriends of Ryder Cup Players”, and “Model Swing: The Best Photos of Maria Verchenova,” which was just another excuse to show a woman in a bikini.

I find it embarrassing, and I’m not even part of the Golf dot Com staff.

From a practical point of view, the mistreatment of the women’s game is suicidal. Women represent 50.8% of the US population, but only 22% of its golfers. If the game — and these publications are going to survive — they’ve got to draw more women into the golf. To do that, they’ve got to start treating women like human beings, not sex objects.

I have watched LPGA golfers on numerous occasions, at events such as the Jamie Farr and the Volvik Championship. I can testify that — beyond a doubt –most of these athletes would destroy any male weekender they come across. I frankly have yet to see the male amateur who could challenge them.

The 100th best LPGA player averages nearly 250 off the tee. The average male golfer, according to all available statistics, averages 200.

Readers of Golf Dot Com actually have a lot to learn from the LPGA.

This is a call to Executive Editor Alan Bastable: Start treating women’s golf with the respect it deserves. Unless you are willing to publish articles like “The Most Beautiful Men In Golf,” and put it front-and-center on your site, stop these awful sexist click-bait articles about professional athletes who happen to be women. 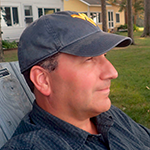 John Lloyd Retzer is the editor/writer/photographer/programmer/janitor of GolfBlogger.Com, the ‘net’s oldest continuously published golf blog. In his career, Retzer has worked as a teacher, lecturer, writer, ghost-writer, reporter, photographer, and recreation manager. Retzer has written three books, “The Five Inch Course: Thinking Your Way To Better Golf“, “Golf Remixed: New Ways To Play The Ancient Game” and “Things In The Basement: A History of Halloween Horrors.” He is a graduate of West Virginia University and the University of Michigan.