I started practicing at the golf resort where I worked and hit ball after ball after ball. I would hit a whole pyramid daily (which was 400 balls). I was too nervous I would ruin the course, so I didn’t play there but just practiced.

That summer I did play on some other smaller courses closer to my home but spent most of my time practicing before and after work.

I was on the range when a member walked past and told me I was looking good. I thanked him for the encouragement and he told me my swing was terrible but I looked good doing it. He then proceeded to give me unasked for advice and tips. When I asked him how many lessons he had had he proudly puffed up his chest and said none, he was self-taught.

I watched him swing a club, ignored everything he told me and went back to the grind.

I’d had a couple of lessons with the club professional Anne Chouinard and was practicing what she had taught me. Why would I listen to someone who had never had a lesson?

Since then I have spent the last two-and-a-half years travelling, writing, speaking and reading all things golf. I participate in #Golfchat on Twitter, I write a golf blog and attend golf tournaments with media accreditation and am now running a non-profit, Fairways, sponsoring underprivileged junior golfers all over the world.

I have met hundreds of golfers since I fell in love with the game, and I am well aware there is a disproportionate mix of men to women involved in this wonderful sport.

That said, you should sit in the media centre of a golf tournament. Now there is an imbalance. 90% of the people in there are men and the majority of them are welcoming and extremely nice. There was one instance where a man told me that it wasn’t my place to even be there, as what would a woman know about golf?

Old school thought, and I must say he was a bit of a bully. I watched him interact with everyone that week and the disdain and disregard with how he treated all of the females in the room was remarkable. He worked in print media and told me writing a blog was foolish. A couple of the other women commented to me about his behaviour but I just ignored it. I have no time for people like that.

I travel around the world on my own and pick up golf buddies where ever I go. Mostly I play with men but I have had the pleasure of connecting with women who golf in nearly every country I have visited. While I love playing with everyone, it is a nice treat to spend my day with the ladies and hear their golfing stories.

Most of them started out in similar fashion and had issues when they had decided they wanted to learn. Some had attended a corporate golf day and had success with a club and looked for someone to teach them. While a few women attended their local club, some looked online for lessons and some spoke with their male friends who they knew golfed.

The responses were varied from, “You want to learn to golf? Sure I guess we can teach you,” to, “We don’t really have many women that play here so you would probably be better going elsewhere.” That story was ten years old, and such responses would hopefully not occur today, as golf courses recognise the need to encourage and convert women into passionate golfers. If not, they just may see their old boys clubs close.

That is one difference between men and women when it comes to golf. A woman who is taking it up will look for someone to teach them. A lot of men will buy some clubs, go out with their friends and whack balls hoping they improve. For me, I found an expert to teach me what I didn’t know.

Since I have fallen in love with golf, I ask women I meet if they play. Some women have said they considered it but were too intimidated by the portrayal of female golfers as they don’t think they fit the look of a golfer. I tell them golf is for everyone, for every level of fitness, body shape and the only thing you need is determination to start out.

But I understand where they are coming from. I have stopped subscriptions to online publications that sexualise female golf. I would not have a problem if there were men also in their swimmers hitting balls but that just doesn’t happen.

I have also written to a publication that claims to be all about golf, celebrating the week in professional golf across the board. Yet week in, week out they completely ignore the female professionals and only document a story about how good so and so looked at the beach but never about how she can bend it like Beckham using her 7 iron. Needless to say there is certainly not the world rankings for the ladies included in this publication.

Recently, I was chatting to a caddie on the PGA tour who told me I should wear shorter skirts and show more cleavage. When I asked why I would possibly want to do that, he told me it would get me more followers.

While I acknowledge that doing that exact thing can garner more sponsorship should that be what you are seeking, I am not about followers. I am just plugging away doing what I do and I don’t need a short skirt or boobs out to achieve this.

I love the women I have met in golf, be it Irish locals Maura and Mary at Ballycastle Golf Club, to Kathie Shearer, a dynamic force who runs the media centre at the Australian Open. I am continually reading about women who are pushing through the barriers.

Last year I read about Ada Mackenzie who pioneered the Ladies Golf Club of Toronto. Purely because in the early 1920s as one of the best amateur golfers in Canada, she couldn’t get a tee time simply because she was female. So with the help of Stanley Thompson (she couldn’t get a bank loan either because she was female) she built a course where women, to this day, still get priority tee times. A lot has changed in female golf since the 1920s but there is certainly room for improvement.

I have met strong women advocating golf in every country I visit, and yet at some clubs we are still an afterthought. A pet peeve of mine and one thing I don’t understand is why some golf clubs think that throwing a few pink shirts and balls in the pro shop deems them women friendly. Some women don’t like pink!!!!

I admit that I am not your average golfer nor average woman for that matter, considering I travel alone around the world and tee it up continuously with strangers (who are usually friends by the 4th) and haven’t had too many issues with old boys clubs who would prefer me not being in their way. But I know a lot of other women who feel intimidated and unwelcome and unwanted.

My advice to them is to find another club. There is usually one around the corner (unless you are in Bolivia where there are only 7 golf courses – another story altogether) who would love to have your business and would gladly have you as part of their ranks.

I am going to finish my blog with words from a good friend who wrote a fantastic blog about International Women’s Day and Golf “As opposed to waiting for change, let’s be the change and start calling out those who engage in disrespectful behaviour.”

Mike, I couldn’t say it any better. 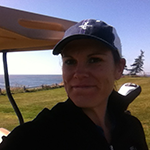 Golf has taken over Tiff’s life, she is unreservedly happy on a golf course and plays or practices as often as she can (preferably 5-6 times a week).  Since July 2014 when she started her love affair with golf, she has golfed at 100 courses in 10 countries (and counting), and has started a non-profit, called Fairways, to sponsor junior golfers all over the world. Golf just makes her smile and she spends most of her day talking golf, playing golf or writing about golf.